IF YOUR NEIGHBORS ARE COMPLAINING, it’s probably time to consider tuning your piano. Tuning is a large part of our business, and we take pride in the quality of our work. In addition, we have the ability to correct any piano problem, from sticking keys and buzzing notes, to major regulation and key top replacement. We carry a large stock of parts, so we can usually complete your repair without a return trip.

Please call or e-mail us to schedule an appointment or ask a piano question not answered below.

HOW OFTEN DO I NEED TO TUNE MY PIANO?

Rechel Piano Company has found that an annual tuning is sufficient for most pianos in the home. Pianos in churches or those that receive unusual amounts of play may require semi-annual or even quarterly tunings.

HOW LONG SHOULD I WAIT TO TUNE AFTER I MOVE MY PIANO?

Usually 2 to 3 weeks is sufficient to allow the piano to acclimate to its new environment. This stabilization allows the tuning to last longer.

DO I NEED TO KEEP MY PIANO ON AN INSIDE WALL?

It depends on the age of your home. Homes built prior to World War II generally have less insulation in the wall. A cold zone can develop between your piano and the exterior wall in the winter, causing the piano to loose its tune more quickly.


In homes with well-insulated walls, this is not an issue and piano can be safely placed anywhere. With grand pianos, the proximity to outside walls is not a factor. However, warm or cold drafts from doors or heating ducts, and direct sunlight on your grand can affect the tuning and finish. If your piano feels warm to the touch, then the sunlight is probably affecting the duration of the tuning, and may be damaging the cabinet as well.

MY PIANO HASN’T BEEN TUNED IN YEARS. WHAT SHOULD I DO?

Often one tuning is all which is necessary to return your piano to concert pitch. However, on occasion the strings are so loose that when tightened, they stretch back some and cause the piano to drop out of tune again. More than one tuning is necessary in these cases to get the piano to stay in tune. Your technician can determine if multiple tunings will be necessary and recommend a schedule to return your piano to good tune.

WHAT IS CONCERT PITCH?

A standard frequency at which all instruments are tuned. The “A” above middle “C” is tuned to 440 cycles/minute, or “A 440”.

MY PIANO WON’T HOLD A TUNE. WHAT SHOULD I DO?

If your piano has been tuned regularly, the most likely reason it won’t hold a tune is that your pin block is has dried out and is not holding the tuning pins tightly-causing them to slip and let the strings loosen. Your technician can determine if the application of pin block tightener will restore the pin block, or if oversized pins or a new pin block is necessary.

WHAT’S THE DIFFERENCE BETWEEN AN UPRIGHT, CONSOLE, AND SPINET PIANO?

Upright pianos, built from the 1890s through the start of World War II, stand approximately five feet tall and are the largest of the vertical pianos. 85% of pianos between 1910 and 1925, upright and grand, had players built into them, so your upright will probably have a player in it.


The spinet piano, which became popular in the mid-50s, stands about three feet tall and has a slightly different action to accommodate its small size.

HOW BIG IS A BABY GRAND?

A baby grand is usually considered any grand where the distance from the keyboard to the back of the piano is less than six feet. Grand pianos in the six-foot range are generally termed parlor or studio grands, while pianos larger than seven-foot are concert grands, and found most often on the stage.

WHY DO SOME OF MY KEYS STICK?

The most common reason is that the key itself has swollen slightly and is binding on the pins that locate the key on the piano. Occasionally, a hammer may bind on the adjacent hammer or an action part may be tight. In some instances, there is a foreign object causing the problem. The technician can easily repair any of these problems as he tunes the piano. Minor repairs, such as these, are generally included in the cost of our tuning.

CAN YOU REPLACE INDIVIDUAL IVORIES?

If you have 10 or less missing ivories, generally we can find replacements that are approximately the same shade of white. Rechel Piano Company has a supply of used ivories that we obtain from old pianos. If a greater number of ivories are missing, it is difficult to do a good match to the color and size of the existing ivories, and we recommend replacement of the entire set of keytops.


Since ivory is derived from the tusks of elephants and is currently illegal to import, we use an imitation ivory made out of polycarbonate plastic that has the color and even the grain of ivory.

CAN YOU CLEAN DISCOLORED IVORIES OR PLASTIC KEYTOPS?


Care should be taken to not wet the wooden portion of the key, as it is susceptible to warping. The yellowing of some ivories is natural to the ivory and therefore cannot be removed. Ivory on the elephant is actually yellow. In manufacture, it is bleached white. The lack of sunlight causes to the ivory to return to its natural state.

CAN ALL THE WHITE KEYTOPS BE REPLACED?

Yes, however due to restrictions on the import of ivory, they are now replaced with an imitation ivory made from a polycarbonate plastic that has the off white color and grain of ivory.

CAN THE SHARPS BE REPLACED?

Yes, new sharps are available in either ebony wood or plastic. We also stock used sharps and can most times match a missing sharp.

CAN YOU REPAIR BROKEN OR MISSING HAMMERS AND SHANKS?

Yes, our repair technicians carry a complete line of replacement parts in their vehicle.

WHEN DO I NEED TO HAVE MY PIANO REGULATED?

When a piano is regulated, adjustments are made in the piano action to compensate for wear, and restore the piano to its original touch and responsiveness. Generally a piano will need 30 years of wear to require regulation. Our technicians can advise you whether your piano would benefit from regulation.

HOW CAN I CLEAN UNDER THE STRINGS ON MY GRAND PIANO?

Unfortunately, there is no good way for the owner to clean under the strings. Compressed air will remove the dust, but blows it into the room. To fully clean the soundboard, a two step process is utilized involving the removal of the piano action, wet cloth swabs, and compressed air. With advance notification, our technicians can clean the soundboard during a tuning.

HOW DO I MOVE A PIANO?

When moving a piano within your home, gentle movement is recommended to prevent jarring the piano out of tune. With grand pianos, a person should be at each leg, lifting slightly to avoid damage to the legs.


For moves exterior to the house, or for moves to different floors, we recommend the use of professional movers because it is easy to damage the piano, your house, or yourself while moving a piano. Rechel Piano Company always utilizes Smooth Moves, (513) 522-4818, because of their expertise in piano moving.

DO YOU OFFER DISCOUNTS? 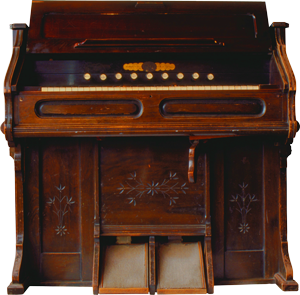 Do you want to repair yours?

We strive to have a service technician available to answer the phone 9 to noon, E.S.T., weekdays. At other times, they will answer if they are available, but they may be doing restorations or be in the field. At these times, please leave a message and we will respond as soon as possible.